Aaron Hill is like a real-life Mike Brady, although his family is the reverse of the one that lives in syndication on The Brady Bunch. He has three daughters, Emily (10), Gwen (7) and Lilly (4), while his wife, Tasha, has three sons, Alex (11), Lorenzo (7) and Gabriel (5).

Unlike the patriarch of the Brady family, Hill is enrolled in the Master of Business Administration with a Concentration in Accounting online program at Southern Oregon University. He and Tasha were both raising kids while working on their education.

“We got married in October 2018. She was also working on an online degree for her undergraduate. We were doing homework on our honeymoon,” he said.

The online format allows Hill to study without sacrificing much work or family time. He is an operations manager at a senior living healthcare company in Eugene, Oregon, a role he has been in for six months after serving as executive director of Cascade Living Group in Bothell, Washington, for nearly two years.

“There are times when I am in a crunch and it’s tough to keep everything going,” Hill said. “It’s good, though. I take two classes a term. It keeps me very busy, but it’s not too much on my plate. I try to pace myself. With work and life, it’s nice not to have a set class time and get the work done when you have time.”

Although Hill does not have any desire to become an accountant, he chose the concentration because he likes numbers and hopes to become a better-rounded leader.

“I wanted to go back to school to fine-tune my knowledge of business,” he said. “With the job I have now and the job I had previously, I work with financial statements. I wanted to sharpen my skill set with financials and accounting. I started looking around for programs and found Southern Oregon.”

See how an online MBA from SOU made a positive impact on Aaron Hill’s career and family. 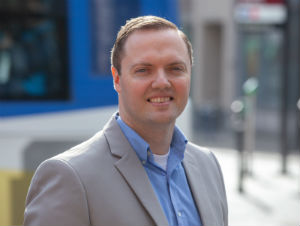 Hill grew up in Eugene and graduated with a bachelor’s degree in business administration, management and operations from Portland State University in 2011.

“I wanted to get into a career that had a purpose,” he said. “I was introduced to taking care of seniors and have loved it ever since. The work has a purpose and a means to an end that benefits other people.”

After stints at senior living and healthcare facilities in Oregon and Washington, Hill landed his current position shortly after enrolling in the online MBA program. He is on track to complete the program in August 2019.

“I chose Southern Oregon because it was 100 percent online and affordable,” he said. “I looked at other universities, but you had to show up to class on certain dates in hybrid programs.”

“I had Financial Statement Analysis circled on the calendar,” he said. “I liked those two courses because they really tie in with the work that I do. Some of it has just been interesting, but the majority of the courses have been applicable.”

Hill, who works a few hours a day on homework and does the bulk of his studying on weekends, also thought MBA 515: Information Systems fit that bill in a different way.

“It was geared more toward businesses like Amazon,” he said. “With tracking and gathering information, we learned about how you can gather data through information technology. It gave me some ideas of how to do that more in our company. Even those offshoot classes seem to relate.”

Hill, who is a sports enthusiast, hopes to put the finishing touches on earning a master’s degree by making the 180-mile trip to Ashland to walk in the commencement ceremony with his newly extended family.

“They’re supportive of me,” he said. “The majority of my family graduated from college and realizes the importance of it. They all did college right out of high school, but I decided to go back a few years later. I wouldn’t say education was a priority in our family as much as it was an expectation that it was something we were all going to do.”

Although Hill was a bit apprehensive about enrolling in the program with a full-time job and a busy family life, he took the leap.

“I would say to anybody who is considering the online MBA program to just do it,” he said. “My biggest fear going in was, ‘Am I going to have the time do it? Will it be worth it?’ Just make that decision, go for it and don’t look back. Don’t go half in.”

Once Hill completes the online MBA program, he hopes to work toward running a senior living community someday. Who knows? Maybe he can even take up architecture as a hobby, like Mike Brady.

“I was fortunate to get where I am now, but I feel like I can add a lot of value,” he said. “Getting my MBA is helping me work toward that, as well. I didn’t ask if being in the program helped me get my current job, but I put it on my resume that I am graduating with an MBA in 2019. I’m excited to take that ‘2019’ off and say I actually got the degree.”

Learn more about the SOU online MBA with a Concentration in Accounting program.

Learn From Accounting Practitioners
Faculty members for Southern Oregon University’s online Master of Business Administration with a Concentration in Accounting program bring academic knowledge and practical, real-world experience to…
Read more
Learn to Evaluate and Analyze Financial Statements
An organization’s financial statements provide snapshots of its well-being, and the ability to evaluate and analyze these statements is among the skills acquired in an…
Read more
SOU Alumna Jasmine Yaeger Earning MBA in Accounting Online in Italy
Northern Italy resident. Southern Oregon University student. Jasmine Yaeger is taking distance learning to the extreme by earning a Master of Business Administration with a…
Read more
Why Pursue an MBA in Accounting?
Make your way to a top position in the financial field by earning a Master of Business Administration with a Concentration in Accounting online. This…
Read more
5 Jobs With a Master's in Adult Education, ESL
One of the challenges of seeking a change in career fields is how to do so while maintaining full-time employment. Southern Oregon University’s online MSEd…
Read more
5 Elements of a High-Quality Preschool
Professional administrators, managers and advocates in the field of early childhood education can enhance their human capital by earning a Master of Science in Education…
Read more
Educator Naya S-Dribinski Enrolls in Online Master's Program at SOU
Naya S-Dribinski is all about coming full circle. The former and returning northern California resident is enrolled in the online Master of Science in Education…
Read more
Helping Students Learn Problem Solving Skills Via STEM Education
Well-trained teachers know how to design STEM projects that encourage students to not only learn problem-solving in the classroom but also examine real-world situations that…
Read more
Illinois Educator Angelique Maguire Thriving in Online Master's Degree Program
Angelique Maguire has come a long way since her days as a graphic design student within the Illinois Eastern Community Colleges (IECC) district. “I was…
Read more
Applications of GIS Mapping in Business
Businesses ranging from entrepreneurial start-ups to multinationals rely on analyses of data from operations to make better decisions more quickly, gain efficiencies, reduce risk and…
Read more
Helping Young Children Develop Healthy Communication Skills
It is essential to recognize that a critical part of early childhood education (ECE) is ensuring that children develop healthy communication skills. The Education Hub…
Read more
Why Managers Should Understand Social Psychology
Understanding what makes people tick is as essential to effective management as are hard skills, which is why modern Master of Business Administration (MBA) programs…
Read more